The Stoning of St Stephen

One of Montgomery’s first commissions for a Victorian church was The Stoning of St Stephen, commissioned for St Stephen’s Anglican Church in Church Street, Richmond.  The two-light was probably ordered by the incumbent, the Rev CT Perks, who had been bequeathed £50 by Mary de Rippe Shelley of Collingwood (died 17 July 1887), specifically for the erection of a stained glass window in the church.[1] 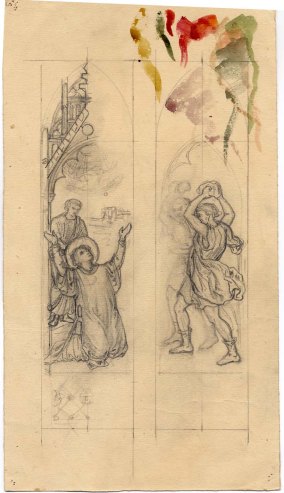 The two-light window was completed by November 1887 and reported to be ‘a  very good example of modern glass painting’, although, to our twenty-first century eyes, it hardly appears ‘modern’.[2]  It was certainly more dynamic and compelling than many of the static saintly figures that were regularly commissioned at the time.  The Church of England Messenger noted Montgomery’s significant experience in ‘the mother country’ and in New South Wales, describing the window as some length.

It represents the martyrdom of the saint to whom the church is dedicated, one compartment showing two men in the act of lapidating him, and the other, St. Stephen kneeling down in an attitude of prayer, and meeting his death with pious resignation, both sections of the picture being surmounted by a rich Gothic canopy…By employing what is called ‘antique glass’ for the draperies – glass, that is to say, which reproduces the air bubbles and tonic modulations observable in stained-glass windows of the fifteenth century – Mr. Montgomery is enabled to obtain delicate gradations of light and shade, without too great transparency on one hand or opacity on the other.[3] 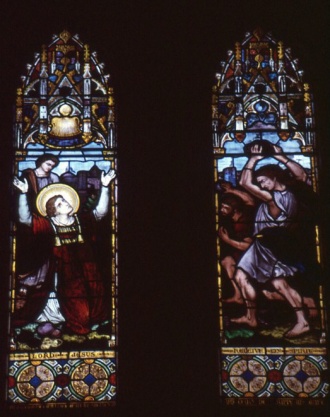 Rev CT Perks’ only incumbency was at St Stephen’s where he was appointed immediately after taking orders in 1851 and remained for more than 40 years.  A pioneer priest, by the 1880s he was a Canon of the Anglican Church and heavily involved in the building of St Paul’s Cathedral, especially for raising funds to import the grand cycle of windows from Clayton & Bell, London.  He died in 1984.[4]