This site is a labour of love, a long, involved journey, which started in the 1990s when I was researching material for my Master of Arts thesis.[1]  At that early stage of research I knew too little of design and techniques to distinguish artists and makers by style, however I kept finding examples of particular works that were fine and distinctive, namely those of William Montgomery.  He made the task of identification much easier as his work was often signed, unlike so many firms that maintained the medieval tradition of the anonymous artist.

My research followed chronologically from Geoffrey Down’s seminal work, ‘Nineteenth-Century Stained Glass in Melbourne’ that studied stained glass from its inception in Victoria the 1850s to the First World War.  He correctly stated of William Montgomery: ‘There is scarcely a church in Melbourne which does not possess a window by him.’[2]  The limited scope of both these research projects left much more to reveal about Montgomery and his work and I hoped that an opportunity might come my way to revisit the research in greater depth and detail.

In a serendipitous meeting, Donna Cooper (now Kennedy), proprietor of Hampton Leadlights (now Director of Glaas Inc.), was asked by Christopher Montgomery for advice on his grandfather’s legacy – miscellaneous materials related to a stained-glass enterprise.  It turned out to be the most comprehensive collection of drawings, sketchbooks, ‘thumbnails’, full-scale cartoons, accounts, ledgers, books and source materials of any Australian stained-glass artist or enterprise.  I was immensely privileged to be given wholehearted access to the material by its custodians, Christopher and Helen Montgomery who had gathered the material together from where it had lain in various family cupboards, attics and garages over three generations.  This collection became the basis for my PhD thesis.[3]

Christopher and his brother Michael Montgomery generously gifted the documentary material to the State Library of Victoria in 2012 where it is gradually being sorted, catalogued and will be digitised for on-line open access through the Library’s website. This site will then be updated for easier reference to the original material.  It is a remarkable, if not unique resource, and I know of no other collection of such breadth and depth in Australia – a treasure trove that casts new light on history, art and culture in this country and will benefit knowledge and research in many fields for years to come.

William Montgomery remains hidden by the medium in which he chose to work – stained glass. The most prominent feature of this website, will include a catalogue raisonné of more than 600 works, charting Montgomery’s earliest known windows in England to his last, great, unfinished Australian commissions in 1927.  Wherever possible, each entry will be accompanied by images, with details and background information on locations, subjects and donors.  It will be augmented by short articles on aspects of Montgomery’s life and work.

I welcome your feedback and hope you will ‘follow’ progress as the catalogue grows. I hope too that readers will offer new information on already-documented windows, or maybe make some new discoveries.  I feel sure there is so much more to be learned about this talented man and his legacy to Australian art and architecture.

As always, I thank Mif Farquharson for her help in overcoming my legendary shortcomings with computers.  She has really made this happen. 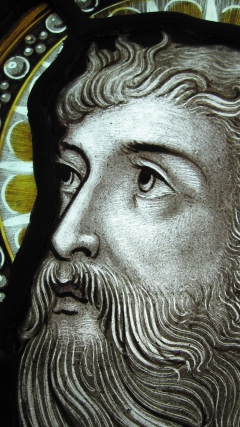 With thanks to Gavin Merrington, Original Stained Glass, Hobart, who conserved the window in 2012.

5 thoughts on “About this site”