Montgomery’s successful commission at St Michael’s, Wagga Wagga was swiftly followed by a commission to fill windows in the Catholic church at Yass.[1]  The Dean of Yass, the Very Rev Dean O’Keeffe, was planning to enlarge the Church of St Augustine in 1887 to designs drawn up by Mr Spadacini.[2] Tenders were first called in October of that year, then readvertised in December with building ‘well underway’ by the following February.[3]  The newly completed building was blessed and opened by the Rt Rev Dr Lanigan, Bishop of Goulburn, during an impressive ceremony attended by 600 people on 20 January 1889, almost exactly one year from the start of the building program.[4] 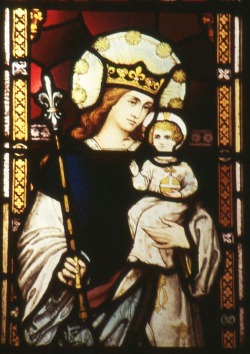 By May 1888, Montgomery was already working on the Crucifixion three-light east window and the series of twelve windows for the nave; all were in place by the opening of the church.[5]  Less than eighteen months since arriving in Melbourne, he was only just beginning to appreciate the strength of sunlight in comparison with Europe’s paler light. Consequently, his understanding of the need to apply glass paint more heavily, especially when creating windows for inland New South Wales (and elsewhere) where stronger sunlight or the building’s geographical orientation might unbalance the overall tonal values of the glass.  It seems unlikely that Montgomery journeyed to Yass before manufacturing the windows and, although less affected than those he painted for St. Michael’s at Wagga Wagga, on brilliant summer days in Yass, some painted features wash out, as can be seen in the images. 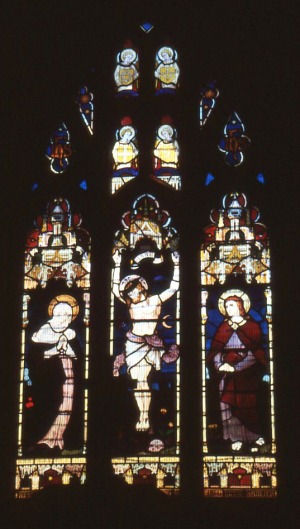 The Crucifixion was chosen for the pivotal window subject in the chancel, around which the other windows ranged, depicting the principal saints of the church.  It was noted in the Yass Courier that Mrs. Elizabeth Sadlier O‘Brien presented the large chancel window in memory of her husband, the late Mr. Henry O‘Brien, of Douro.  The O’Brien family was among the district’s pioneers and Mrs. O’Brien (an Anglican) gave generously to many local charities and causes.[6]  This window, and possibly others in the church, was reportedly installed by Mr R.O. Dickson, a local monumental mason who also supplied the marble altar.[7]  Other local identities and friends of the church gave windows in the nave and vestry, independent of the building fund.  To mark the zeal and determination of Dean O’Keeffe to complete the enlargement and beautification of the building, the congregation and friends presented the St Ambrose/St Jerome window.  Each window, measuring 11 x 8 feet, was reported to cost £28.[8]

Fig. 2 and 3: The Annunciation and St Ambrose/St Jerome, nave, St Augustine’s Catholic Church, Yass (NSW).  Montgomery had designed The Annunciation for Franz Mayer & Co in Munich, and it was a favourite that he adapted for many installations throughout his long career.

In 1956, little St Augustine’s was replaced with a larger modern building on the other side of the road.  The old church was re-purposed as Lovat Chapel, named after the first parish priest, Fr Charles Lovat (1799-1858) who became the parish priest of Yass in 1839.

[1] List of window subjects from the Freeman’s Journal, 2 February 1889, p. 8.  A two-light window of ‘The Redeemer’, and a vestry window were also mentioned in the article, but not located during a site visit.

Fig. 4: St Dominic/St Francis of Assisi, nave, St Augustine’s Catholic Church, Yass (NSW).  Note the simple casement windows in the bases of all windows to give ventilate the building during the summer months.